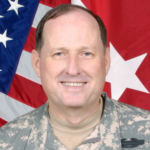 According to Wikipedia, John M. Brown III is a retired lieutenant general of the United States Army. He served as Commander of United States Army Pacific, headquartered at Fort Shafter, Hawaii, from August 25, 2004 to February 1, 2008. He enlisted in the Army as an infantryman in 1969 and became an officer upon completion of Infantry Officer Candidate School in 1971 where he was commissioned a second lieutenant of Infantry.

What Schools Are Affiliated With John M. Brown III?

John M. Brown III is affiliated with the following schools: