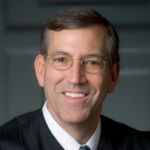 Why Is John M. Gerrard Influential?

According to Wikipedia, John Melvin Gerrard is a United States District Judge of the United States District Court for the District of Nebraska. Early life and education Gerrard graduated from Nebraska Wesleyan University with a Bachelor of Science in 1976; from the University of Arizona with a Masters in Public Administration in 1977; and from McGeorge School of Law at the University of the Pacific with a Juris Doctor in 1981. He is a member of Phi Kappa Tau fraternity.

Other Resources About John M. Gerrard

What Schools Are Affiliated With John M. Gerrard?

John M. Gerrard is affiliated with the following schools: