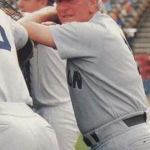 Why Is John McNamara Influential?

According to Wikipedia, John Francis McNamara was an American professional baseball player, manager and coach. After spending over 15 years in the minor leagues as a catcher and player-manager, McNamara helmed six Major League Baseball teams for all or parts of 19 seasons between 1969 and 1996. He directed the 1986 Boston Red Sox to the American League pennant, and was named his league's "Manager of the Year" by both the BBWAA and The Sporting News. However, the Red Sox were defeated by the New York Mets in seven games in the 1986 World Series when they failed to hold a two-run, two-out, two-strike lead in Game 6, and a three-run advantage in Game 7.

Other Resources About John McNamara

What Schools Are Affiliated With John McNamara ?

John McNamara is affiliated with the following schools: