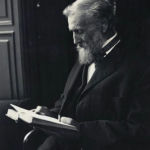 Why Is John Muir Influential?

According to Wikipedia, John Muir , also known as "John of the Mountains" and "Father of the National Parks", was an influential Scottish-American naturalist, author, environmental philosopher, botanist, zoologist, glaciologist, and early advocate for the preservation of wilderness in the United States of America.

Other Resources About John Muir

What Schools Are Affiliated With John Muir?

John Muir is affiliated with the following schools:

What Are John Muir's Academic Contributions?

John Muir has made the following academic contributions: