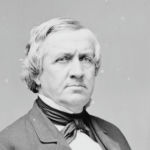 Why Is John P. Hale Influential?

According to Wikipedia, John Parker Hale was an American politician and lawyer from New Hampshire. He served in the United States House of Representatives from 1843 to 1845 and in the United States Senate from 1847 to 1853 and again from 1855 to 1865. He began his Congressional career as a Democrat, but helped establish the anti-slavery Free Soil Party and eventually joined the Republican Party.

Other Resources About John P. Hale

What Schools Are Affiliated With John P. Hale?

John P. Hale is affiliated with the following schools: