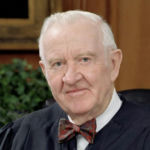 Why Is John Paul Stevens Influential?

According to Wikipedia, John Paul Stevens was an associate justice of the United States Supreme Court, serving from 1975 to 2010. At the time of his retirement, he was the second-oldest justice in the history of the Court and the third-longest-serving justice. At the time of his death, he was the longest lived Supreme Court justice ever. His long tenure saw him write for the Court on most issues of American law, including civil liberties, the death penalty, government action and intellectual property. In cases involving presidents of the United States, he wrote for the court that they were to be held accountable under American law. A registered Republican when appointed who throughout his life identified as a conservative, Stevens was considered to have been on the liberal side of the Court at the time of his retirement.

Other Resources About John Paul Stevens

What Schools Are Affiliated With John Paul Stevens?

John Paul Stevens is affiliated with the following schools: