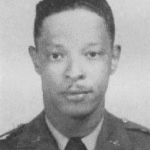 Why Is John R. Fox Influential?

According to Wikipedia, John Robert Fox was a United States Army first lieutenant who was killed in action after calling in artillery fire on the enemy during World War II. In 1997, he was posthumously awarded the Medal of Honor, the nation's highest military decoration for valor, for his actions on December 26, 1944, in the vicinity of Sommocolonia, Italy. It is believed that he called in his own coordinates because he was in an area overran with German soldiers.

Other Resources About John R. Fox

What Schools Are Affiliated With John R. Fox?

John R. Fox is affiliated with the following schools: