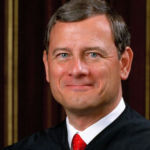 Chief Justice of the United States

Why Is John Roberts Influential?

According to Wikipedia, John Glover Roberts Jr. is an American lawyer and jurist serving as the 17th chief justice of the United States since 2005. Roberts has authored the majority opinion in several landmark cases, including Shelby County v. Holder, National Federation of Independent Business v. Sebelius, King v. Burwell, Department of Commerce v. New York, and Department of Homeland Security v. Regents of the University of California. He has been described as having a conservative judicial philosophy but has shown a willingness to work with the Supreme Court's liberal bloc, and since the retirement of Anthony Kennedy in 2018 has come to be regarded as a swing vote on the Court. Roberts presided over the first impeachment trial of Donald Trump in early 2020; however, he declined to preside over the second impeachment trial of Trump, who was impeached as president, but whose term had expired by the time of the trial.

Other Resources About John Roberts

What Schools Are Affiliated With John Roberts?

John Roberts is affiliated with the following schools: