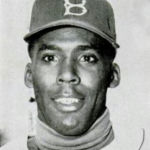 Why Is John Roseboro Influential?

According to Wikipedia, John Junior Roseboro was an American professional baseball player and coach. He played as a catcher in Major League Baseball from 1957 until 1970, most prominently as a member of the Los Angeles Dodgers. A four-time All-Star player, Roseboro is considered one of the best defensive catchers of the 1960s, winning two Gold Glove Awards. He was the Dodgers' starting catcher in four World Series with the Dodgers winning three of those. Roseboro was known for his role in one of the most violent incidents in baseball history when Juan Marichal struck him in the head with a bat during a game in 1965.

Other Resources About John Roseboro

What Schools Are Affiliated With John Roseboro?

John Roseboro is affiliated with the following schools: