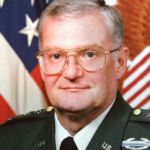 Why Is John Shalikashvili Influential?

According to Wikipedia, John Malchase David Shalikashvili was a United States Army general who served as Supreme Allied Commander Europe from 1992 to 1993 and the 13th chairman of the Joint Chiefs of Staff from 1993 to 1997. He was born in Warsaw, Poland, in the family of émigré Georgian officer Dimitri Shalikashvili and his Polish wife Maria Rüdiger-Belyaeva. In 1996, he was the first recipient of the Naval War College Distinguished Graduate Leadership Award.

Other Resources About John Shalikashvili

What Schools Are Affiliated With John Shalikashvili?

John Shalikashvili is affiliated with the following schools: