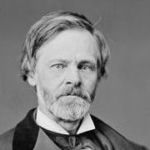 Why Is John Sherman Influential?

According to Wikipedia, John Sherman was a politician from Lancaster, Ohio during the American Civil War and into the late nineteenth century. A member of the Republican Party, he served in both houses of the U.S. Congress. He also served as Secretary of the Treasury and Secretary of State. Sherman sought the Republican presidential nomination three times, coming closest in 1888, but was never chosen by the party.

Other Resources About John Sherman

What Schools Are Affiliated With John Sherman?

John Sherman is affiliated with the following schools: