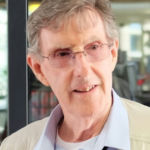 Why Is John Stillwell Influential?

Born in Melbourne, Australia, John Stillwell holds the title of professor emeritus at the University of San Francisco. Though Stillwell came to USF in 2002, he spent the bulk of his career at Monash University in Melbourne from 1970-2001. Stillwell earned his PhD at MIT in 1970.

Stillwell is best known as a source of knowledge and education in mathematics. He has been influential as the author of numerous books on subjects in mathematics, including the history of math in the last two centuries, the foundations of mathematics, algebra, number theory, and geometry. His books are both widely-used textbooks, and popular publications, such Mathematics and its History, Yearning for the Impossible and Reverse Mathematics.

For his work, Stillwell has received awards and honors including the Chauvenet Prize of the Mathematical Association of America, the book award of the Association of Jesuit Colleges and Universities, and was invited to speak at the International Congress of Mathematicians in 1994.

According to Wikipedia, John Colin Stillwell is an Australian mathematician on the faculties of the University of San Francisco and Monash University.Biography He was born in Melbourne, Australia and lived there until he went to the Massachusetts Institute of Technology for his doctorate. He received his PhD from MIT in 1970, working under Hartley Rogers, Jr who had himself worked under Alonzo Church. From 1970 until 2001 he taught at Monash University back in Australia and in 2002 began teaching in San Francisco.

Other Resources About John Stillwell

What Schools Are Affiliated With John Stillwell?

John Stillwell is affiliated with the following schools:

What Are John Stillwell's Academic Contributions?

John Stillwell has made the following academic contributions: