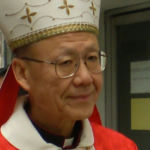 Why Is John Tong Hon Influential?

According to Wikipedia, John Tong Hon is a Chinese prelate of the Catholic Church. A cardinal since 2012, he was auxiliary bishop of Hong Kong from 1996 to 2008, then coadjutor bishop of the diocese for a year, and Bishop of Hong Kong from 2009 to 2017. In January 2019, he became the apostolic administrator of the diocese, in a caretaker role, after the death of his successor, Michael Yeung.

Other Resources About John Tong Hon

What Schools Are Affiliated With John Tong Hon?

John Tong Hon is affiliated with the following schools: