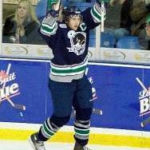 Why Is John Vigilante Influential?

According to Wikipedia, John Vigilante was an American professional ice hockey forward. At the time of his death he was the head coach for the 19u Belle Tire Girls Hockey Program. Playing career Undrafted, Vigilante was an Ontario Hockey League priority selection for the Plymouth Whalers in the 11th Round in 2001. Vigilante was named the team captain of the Whalers at the beginning of the 2005–06 OHL season. He represented the Whalers at the 2006 OHL All-Star Game, held in Belleville, Ontario. His season was cut short with a broken finger, after blocking a shot by the Barrie Colts, as they surged looking for a tying goal at the end of a game. Out for a month, Vigilante returned for the final three games of the regular season to help Plymouth win the West Division.

Other Resources About John Vigilante

What Schools Are Affiliated With John Vigilante?

John Vigilante is affiliated with the following schools: