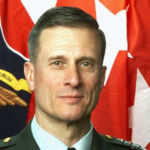 Why Is John W. Hendrix Influential?

According to Wikipedia, John Walter Hendrix is a retired United States Army four-star general who served as Commander, United States Army Forces Command from 1999 to 2001. Early life and education Hendrix was born on September 22, 1942, in Bulloch County, Georgia, and received his commission after graduating from the Georgia Institute of Technology in 1965 with a degree in electrical engineering. Hendrix is of English, Scottish and Italian descent. He earned a master's degree in history in 1978 from Middle Tennessee State University, and is a graduate of both the United States Army War College and the United States Army Command and General Staff College.

Other Resources About John W. Hendrix

What Schools Are Affiliated With John W. Hendrix?

John W. Hendrix is affiliated with the following schools: