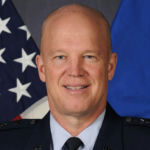 Why Is John W. Raymond Influential?

According to Wikipedia, John William "Jay" Raymond is a United States Space Force general serving as its first chief of space operations. He previously concurrently served as the commander of United States Space Command, a position he held from August 29, 2019, to August 20, 2020. As the Space Force's highest-ranking officer, he currently oversees its organizational stand-up and the transfer of officers and enlisted personnel into the newest service branch.

Other Resources About John W. Raymond

What Schools Are Affiliated With John W. Raymond?

John W. Raymond is affiliated with the following schools: