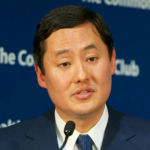 Why Is John Yoo Influential?

Areas of Specialization: Constitutional Law, Foreign Relations Law
John Yoo is the Emanuel S. Heller Professor of Law at the University of California, Berkeley. He graduated from Harvard University with a B.A. and from Yale University with a J.D. He is well known for his scholarship regarding executive power, domestic surveillance, and searches.

Most notably, his name is associated with his Torture Memos, which mounted a defense of the use of torture techniques such as waterboarding as a means of interrogation. His position on the matter was broadly criticized, with Secretary of State Colin Powell characterizing his position as a violation of the tenets of the Geneva Conventions. Yoo’s positions on the extent and inviolability of presidential powers in decision making were too broad and represented an overreach of power that could remove the necessary controls on military action. He even insisted that the executive branch had nearly limitless latitude to surveil American citizens without a warrant should the President deem it necessary.

Prior to Professor Yoo’s career in academia, he clerked for Justice Clarence Thomas of the U.S. Supreme Court and Judge Laurence H. Silberman of the U.S. Court of Appeals of the D.C. Circuit. From 1995-96, Yoo also served as general counsel of the U.S. Senate Judiciary Committee. He additionally served as a deputy assistant attorney general in the Office of Legal Counsel at the U.S. Department of Justice, from 2001 to 2003, where he worked on issues involving foreign affairs, national security and the separation of powers. He most recently authored a book, Defender in Chief: How Donald Trump is Fighting for the Constitution.

According to Wikipedia, John Choon Yoo is a Korean-born American legal scholar and former government official who serves as the Emanuel S. Heller Professor of Law at the University of California, Berkeley, School of Law. Yoo became known in the early-2000s for his legal opinions concerning executive power, warrantless wiretapping, and the Geneva Conventions while serving in the Office of Legal Counsel of the Department of Justice, during the George W. Bush administration. Yoo was the author of the controversial Torture Memos, which set to determine the legal limits for the torture of detainees during the War on Terror.

Other Resources About John Yoo

What Schools Are Affiliated With John Yoo?

John Yoo is affiliated with the following schools: