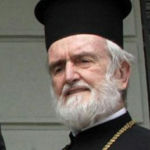 Why Is John Zizioulas Influential?

According to Wikipedia, John Zizioulas is a Greek Orthodox prelate. He is the current titular Metropolitan bishop of Pergamon of the Ecumenical Patriarchate of Constantinople. He is one of the most influential Orthodox Christian theologians today.

Other Resources About John Zizioulas

What Schools Are Affiliated With John Zizioulas?

John Zizioulas is affiliated with the following schools: