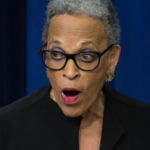 Why Is Johnnetta Cole Influential?

According to Wikipedia, Johnnetta Betsch Cole is an American anthropologist, educator, museum director, and college president. Cole was the first female African-American president of Spelman College, a historically black college, serving from 1987 to 1997. She was president of Bennett College from 2002 to 2007. During 2009–2017 she was Director of the Smithsonian Institution's National Museum of African Art.

Other Resources About Johnnetta Cole

What Schools Are Affiliated With Johnnetta Cole?

Johnnetta Cole is affiliated with the following schools: