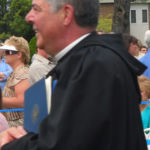 Why Is Jonathan DeFelice Influential?

According to Wikipedia, Jonathan DeFelice , O.S.B. is the former President of Saint Anselm College in Goffstown, New Hampshire. Serving the college for 24 years, Father DeFelice was the longest serving college president in the state of New Hampshire. Growing up in Bristol, Rhode Island, he graduated from Portsmouth Abbey School in 1965, and then attended Saint Anselm College, earning a bachelor's degree in Philosophy in 1969. He entered Saint Anselm Abbey as a novice in 1968, and professed solemn vows as a Benedictine monk in 1973. He was ordained a Catholic priest in 1974. Defelice was a "Faithful Educator" according to Christy Nadalin in her book, Legendary Locals of Bristol.

Other Resources About Jonathan DeFelice

What Schools Are Affiliated With Jonathan DeFelice?

Jonathan DeFelice is affiliated with the following schools: