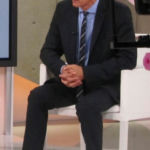 Why Is Jorge Ramos Influential?

According to Wikipedia, Jorge Gilberto Ramos Ávalos is a Mexican-American journalist and author. Regarded as the best-known Spanish-language news anchor in the United States of America, he has been referred to as "The Walter Cronkite of Latin America". Based in Miami, Florida, he anchors the Univision news television program Noticiero Univision, the Univision Sunday-morning political news program Al Punto, and the Fusion TV English-language program America with Jorge Ramos. He has covered five wars, and events ranging from the fall of the Berlin Wall to the War in Afghanistan.

Other Resources About Jorge Ramos

What Schools Are Affiliated With Jorge Ramos ?

Jorge Ramos is affiliated with the following schools: