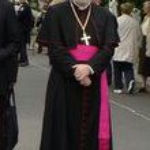 Why Is Jos Punt Influential?

According to Wikipedia, Jozef Marianus "Jos" Punt was the Roman Catholic bishop of Haarlem-Amsterdam in the Netherlands from 2001 to 2020. Early life Joseph Marianus Punt was born on 10 January 1946 in Alkmaar, North Holland, Netherlands. In his years as a student of economics in Amsterdam Punt distanced himself from the Catholic religion of his youth and was more involved in esotericism, gnosticism and Rosicrucianism. Upon discovering the Bible however, he began considering a career in the priesthood. He went to the south of the country where at the time there existed the only Catholic Dutch Seminary. In 1973 he obtained a doctoral degree in economics from the University of Amsterdam.

Other Resources About Jos Punt

What Schools Are Affiliated With Jos Punt?

Jos Punt is affiliated with the following schools: