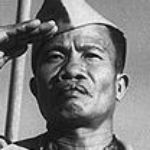 Why Is Jose Calugas Influential?

According to Wikipedia, Jose Cabalfin Calugas was a member of the Philippine Scouts during World War II. He received the Medal of Honor for actions during the Battle of Bataan. At the age of 23, Calugas joined the Philippine Scouts of the United States Army and completed training as an artilleryman and served with different artillery batteries of the Philippine Scouts until his unit was mobilized to fight in World War II. After noticing one of his unit's gun batteries had been put out of commission and its crew killed, he gathered several members of his unit together, dug in and attempted to defend the line. He was captured along with other members of his unit and forced to march to a distant enemy prison camp, where he was held as a prisoner of war. When he was released in 1943, he was secretly assigned to a guerrilla unit in the Philippines where he fought for the liberation of the Philippines from the Japanese.

Other Resources About Jose Calugas

What Schools Are Affiliated With Jose Calugas?

Jose Calugas is affiliated with the following schools: