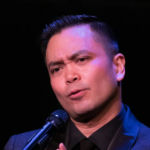 Why Is Jose Llana Influential?

According to Wikipedia, Jose Llana is a Filipino-American singer and actor best known for his roles on Broadway. Biography Born 5 May 1976, Llana, a native of Manila, Philippines, grew up in Springfield, Virginia, a suburb of Washington, D.C. After graduating from Thomas Jefferson High School for Science and Technology in Alexandria, Virginia, Jose attended the Manhattan School of Music to study classical voice. During his freshman year he was discovered in an audition for the 1996 Revival of Rodgers and Hammerstein's The King and I and made his Broadway debut as Lun Tha starring opposite Lou Diamond Phillips and Donna Murphy.

Other Resources About Jose Llana

What Schools Are Affiliated With Jose Llana?

Jose Llana is affiliated with the following schools: