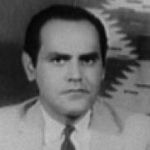 Why Is José Quintero Influential?

According to Wikipedia, José Benjamín Quintero was a Panamanian theatre director, producer and pedagogue best known for his interpretations of the works of Eugene O'Neill. Biography Early years Quintero was born in Panama City, Panama, the fourth of 4 children, to Carlos Quintero Rivera, from Panama, and Consuelo Palmerola from Panama. As a boy he was an acolyte, though he described his childhood in other ways as a disaster—the result of a domineering and overbearing father. He was educated in the United States at Los Angeles City College, the University of Southern California, and the Goodman School of Drama at the Art Institute of Chicago . where he decided on a career in theatre. After notification of his intention, his father, who wanted him to be a physician, declared him dead, leading to Jose's seven-year estrangement from his family.

Other Resources About José Quintero

What Schools Are Affiliated With José Quintero?

José Quintero is affiliated with the following schools: