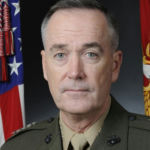 Why Is Joseph Dunford Influential?

According to Wikipedia, Joseph Francis Dunford Jr. is a retired United States Marine Corps four-star general, who served as the 19th chairman of the Joint Chiefs of Staff from October 1, 2015 until September 30, 2019. He was the 36th commandant of the Marine Corps. Dunford is the first Marine Corps officer to serve in four different four-star positions; the others include commander of the International Security Assistance Force and United States Forces – Afghanistan from February 2013 until August 2014, and as the 32nd Assistant Commandant of the Marine Corps from October 23, 2010, to December 15, 2012. He has commanded several units, including the 5th Marine Regiment during the 2003 invasion of Iraq.

Other Resources About Joseph Dunford

What Schools Are Affiliated With Joseph Dunford?

Joseph Dunford is affiliated with the following schools: