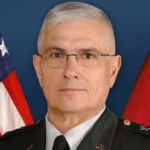 Why Is Joseph J. Taluto Influential?

According to Wikipedia, Joseph J. Taluto is a retired United States Army general who served as the Adjutant General of New York. He held the rank of major general. As such, he was the director of the New York State Division of Military & Naval Affairs, and served as overall commander of the New York Army National Guard, New York Air National Guard, New York Guard and New York Naval Militia. Taluto commanded the 42nd Infantry Division in Iraq during Operation Iraqi Freedom from 2004 to 2006.

Other Resources About Joseph J. Taluto

What Schools Are Affiliated With Joseph J. Taluto?

Joseph J. Taluto is affiliated with the following schools: