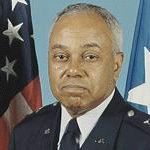 American activist and retired USAF general officer, one of the Greensboro Four

Why Is Joseph McNeil Influential?

According to Wikipedia, Joseph Alfred McNeil is a retired major general in the United States Air Force who is best known for being a member of the Greensboro Four; a group of African American college students who, on February 1, 1960, sat down at a segregated Woolworth's lunch counter in downtown Greensboro, North Carolina challenging the store's policy of denying service to non-white customers.

Other Resources About Joseph McNeil

What Schools Are Affiliated With Joseph McNeil?

Joseph McNeil is affiliated with the following schools: