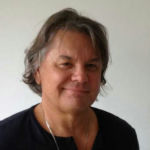 Why Is Joseph Nechvatal Influential?

According to Wikipedia, Joseph Nechvatal is an American post-conceptual digital artist and art theoretician who creates computer-assisted paintings and computer animations, often using custom-created computer viruses. Life and work Joseph Nechvatal was born in Chicago. He studied fine art and philosophy at Southern Illinois University Carbondale, Cornell University and Columbia University. He earned a Doctor of Philosophy in Philosophy of Art and Technology at the Planetary Collegium at University of Wales, Newport and has taught art theory and art history at the School of Visual Arts. He has had many solo exhibitions, including one in Berlin

Other Resources About Joseph Nechvatal

What Schools Are Affiliated With Joseph Nechvatal?

Joseph Nechvatal is affiliated with the following schools: