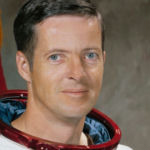 Why Is Joseph P. Kerwin Influential?

According to Wikipedia, Joseph Peter Kerwin is an American physician and former NASA astronaut, who served as Science Pilot for the Skylab 1 mission from May 25 – June 22, 1973. He was the first physician to be selected for astronaut training. Joe Kerwin was the one who uttered the words during Apollo 13: “Farewell, Aquarius, and we thank you.” Kerwin was inducted into the United States Astronaut Hall of Fame in 1997.

Other Resources About Joseph P. Kerwin

What Schools Are Affiliated With Joseph P. Kerwin?

Joseph P. Kerwin is affiliated with the following schools: