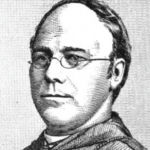 Why Is Joseph Rademacher Influential?

According to Wikipedia, Joseph Rademacher was an American prelate of the Roman Catholic Church. He served as Bishop of Nashville, Tennessee and Bishop of Fort Wayne, Indiana . Biography Joseph Rademacher was born in Westphalia, Michigan, to Bernard and Theresia Rademacher, who were German immigrants. In 1855, he began his classical and philosophical studies under the Benedictines at St. Vincent's College in Latrobe, Pennsylvania. He completed his theological studies at St. Michael's Seminary in Pittsburgh. Attached to the Diocese of Fort Wayne, Indiana, he was ordained to the priesthood by Bishop John Henry Luers on August 2, 1863. He then served as the first resident pastor in Attica, also attending to the nearby missions, until 1870, when he was transferred to Columbia City. In 1872 he became chancellor of the diocese and pastor of St. Mary's Church in Fort Wayne. He served as pastor of St. Mary of the Immaculate Conception Church in Lafayette from 1880 to 1883.

Other Resources About Joseph Rademacher

What Schools Are Affiliated With Joseph Rademacher ?

Joseph Rademacher is affiliated with the following schools: