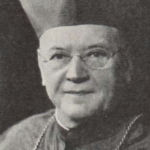 Why Is Joseph Schrembs Influential?

According to Wikipedia, Joseph Schrembs was a German-born prelate of the Roman Catholic Church. He served as the bishop of the Diocese of Toledo and the Diocese of Cleveland, Ohio . Biography Early life and education Joseph Schrembs was born in the village of Wutzlhofen , Bavaria. One of sixteen children, he was born to George and Mary Schrembs. Shortly afterwards he and his family moved to Regensburg, where Joseph received his early education. In 1877 he came to the United States under the patronage of Bishop Rupert Seidenbusch, and enrolled at St. Vincent's College in Latrobe, Pennsylvania, where his older brother Rudesind had become a Benedictine monk. After completing his classical course at St. Vincent's at age sixteen, he taught at the parochial school of St. Martin's Church until 1884. He was then accepted as a seminarian by Bishop Henry Richter of Grand Rapids, Michigan, who sent him to study philosophy and theology at the Grand Seminary of Montreal in Quebec, Canada.

Other Resources About Joseph Schrembs

What Schools Are Affiliated With Joseph Schrembs?

Joseph Schrembs is affiliated with the following schools: