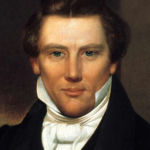 Why Is Joseph Smith Influential?

According to Wikipedia, Joseph Smith Jr. was an American religious leader and founder of Mormonism and the Latter Day Saint movement. When he was 24, Smith published the Book of Mormon. By the time of his death, 14 years later, he had attracted tens of thousands of followers and founded a religion that continues to the present with millions of global adherents.

Other Resources About Joseph Smith

What Are Joseph Smith's Academic Contributions?

Joseph Smith has made the following academic contributions: