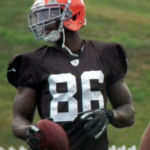 Why Is Josh Gordon Influential?

According to Wikipedia, Joshua Caleb Gordon is an American football wide receiver who is a free agent. He previously played for the Cleveland Browns, New England Patriots, Seattle Seahawks, and Kansas City Chiefs. Nicknamed "Flash", he played college football at Baylor and was selected by the Browns in the second round of the 2012 NFL Supplemental Draft. Throughout his career, Gordon has been lauded for his on-field production, but has also faced several suspensions for violating the NFL's substance abuse policy.

Other Resources About Josh Gordon