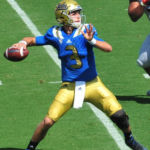 Why Is Josh Rosen Influential?

According to Wikipedia, Joshua Ballinger Lippincott Rosen is an American football quarterback for the Cleveland Browns of the National Football League . He previously played in the National Football League for four seasons. Rosen played college football at UCLA, where he received Freshman All-American and Pac-12 Freshman Offensive Player of the Year honors in 2015. During his junior year, Rosen set the school's record for single-season passing yards.

Other Resources About Josh Rosen

What Schools Are Affiliated With Josh Rosen?

Josh Rosen is affiliated with the following schools: