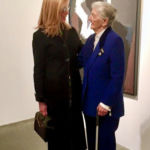 Why Is Judith Godwin Influential?

According to Wikipedia, Judith Godwin was an American abstract painter, associated with the Abstract Expressionist movement. Early life and education Judith Godwin was born in Suffolk, Virginia, in 1930 to a father who was interested in architecture and landscape gardening. His interests created an environment that inspired and encouraged Judith to pursue painting. She attended Mary Baldwin College in 1948 for two years. It was there that she met Martha Graham, who performed there in 1950. Godwin transferred to Richmond Professional Institute , now Virginia Commonwealth University, where she completed her degree in 1952. While there, she studied with Maurice Bond, Jewett Campbell, and Theresa Pollak. At the time, women were required to wear a skirt in the cafeteria; Godwin wore jeans after rushing from a studio class and was reported to the dean of the school, Margaret Johnson, who then met with her and changed the rule to allow women to wear jeans. While at RPI, she was in classes and close friends with Richard Carlyon.

Other Resources About Judith Godwin

What Schools Are Affiliated With Judith Godwin?

Judith Godwin is affiliated with the following schools: