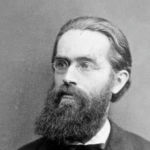 Why Is Julius von Hann Influential?

According to Wikipedia, Julius Ferdinand von Hann was an Austrian meteorologist. He is seen as a father of modern meteorology. Biography He was educated at the gymnasium of Kremsmünster and then studied mathematics, chemistry and physics at the University of Vienna, then geology and paleontology under Eduard Suess and physical geography under Friedrich Simony. From 1865 to 1868, he was master at the Oberrealschule at Linz, and in 1865 was invited by Karl Jelinek to become the first editor of the Zeitschrift für Meteorologie. In 1877, he succeeded Jelinek as the director of the Meteorologische Zentralanstalt and was appointed professor of meteorology at the University of Vienna. In 1897, he retired as director and became professor of meteorology at the University of Graz, but returned to Vienna to fill the chair of professor of cosmic physics in 1900, where he remained until 1910. In 1912, he was made a foreign knight of the Prussian Ordre Pour le Mérite.

Other Resources About Julius von Hann

What Schools Are Affiliated With Julius von Hann?

Julius von Hann is affiliated with the following schools: