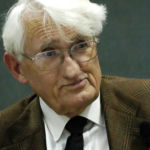 Why Is Jürgen Habermas Influential?

Habermas is known for his work on communicative rationality, a position that place emphasis on rationality developing out of interpersonal communication, rather than objective structures in the universe, as with traditional rationalism in philosophy. Significantly, Habermas’s theory attempts to advance the aims of human emancipation in terms of a universalism in morals. Habermas has drawn on diverse philosophical positions and schools, from the older German philosophical thought of legends like Kant to 19th century American schools such as pragmatism. Importantly, Habermas breaks with schools of thought like postmodernism, with his hope that Enlightenment rationality and science can be salvaged and developed within contemporary frameworks.

Habermas has won numerous awards throughout his long and distinguished career, including the Hegel Prize, the Sigmund Freud Prize, and the Theodor W. Adorno Award. He won the Karl Jaspers Prize in 1995, and the Viktor Frankl Award in 2011.

According to Wikipedia, Jürgen Habermas is a German philosopher and sociologist in the tradition of critical theory and pragmatism. His work addresses communicative rationality and the public sphere. Associated with the Frankfurt School, Habermas's work focuses on the foundations of epistemology and social theory, the analysis of advanced capitalism and democracy, the rule of law in a critical social-evolutionary context, albeit within the confines of the natural law tradition, and contemporary politics, particularly German politics. Habermas's theoretical system is devoted to revealing the possibility of reason, emancipation, and rational-critical communication latent in modern institutions and in the human capacity to deliberate and pursue rational interests. Habermas was known for his work on the concept of modernity, particularly with respect to the discussions of rationalization originally set forth by Max Weber. He has been influenced by American pragmatism, action theory, and poststructuralism.

Other Resources About Jürgen Habermas

What Schools Are Affiliated With Jürgen Habermas?

Jürgen Habermas is affiliated with the following schools:

What Are Jürgen Habermas's Academic Contributions?

Jürgen Habermas has made the following academic contributions: