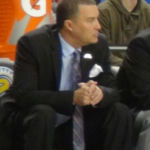 Why Is Justin Hutson Influential?

According to Wikipedia, Justin Lee Hutson is an American college basketball coach who is the current head coach of the Fresno State Bulldogs men's basketball team. Playing career Hutson began his college basketball career at two junior colleges, first Bakersfield College in 1989–90 then Ventura College from 1990 to 1992. From 1992 to 1994, Hutson played at Cal State Bakersfield, which was NCAA Division II at the time. Hutson was a member of the Roadrunners' 1993 NCAA Championship and 1994 NCAA Championship squads.

Other Resources About Justin Hutson

What Schools Are Affiliated With Justin Hutson?

Justin Hutson is affiliated with the following schools: