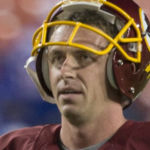 Why Is Kai Forbath Influential?

According to Wikipedia, Kai August Forbath is an American football placekicker who is a free agent. He played college football at UCLA and was recognized as an All-American and the best college kicker in the country in 2009. Forbath was signed by the Cowboys as an undrafted free agent in 2011, and has played for Washington, New Orleans Saints, Minnesota Vikings, Jacksonville Jaguars, Dallas Cowboys, New England Patriots, and Los Angeles Rams.

Other Resources About Kai Forbath

What Schools Are Affiliated With Kai Forbath?

Kai Forbath is affiliated with the following schools: