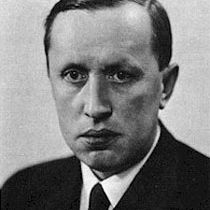 Karel Čapek was a Czech writer, playwright and critic. He has become best known for his science fiction, including his novel War with the Newts and play R.U.R. , which introduced the word robot. He also wrote many politically charged works dealing with the social turmoil of his time. Influenced by American pragmatic liberalism, he campaigned in favour of free expression and strongly opposed the rise of both fascism and communism in Europe.