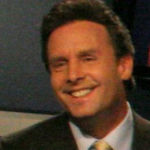 Why Is Karl Ravech Influential?

According to Wikipedia, Karl Ravech is an American journalist who works as the primary play by play commentator for Sunday Night Baseball. Early life and education Ravech graduated from Needham High School in Needham, Massachusetts before receiving a Bachelor's Degree in Communications from Ithaca College in 1987. He also received a Master's Degree in Management and Leadership from Binghamton University in 1990.

Other Resources About Karl Ravech

What Schools Are Affiliated With Karl Ravech?

Karl Ravech is affiliated with the following schools: