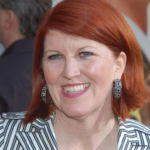 Why Is Kate Flannery Influential?

According to Wikipedia, Kate Flannery is an American actress. Following her early theatre work, Flannery had her screen breakthrough playing Meredith Palmer on the NBC series The Office, which won her two Screen Actors Guild Awards. She went on to star as Principal Saperstein on the Hulu series All Night, compete on the 28th season of Dancing with the Stars, and voice Carol on the animated series OK K.O.! Let's Be Heroes.

Other Resources About Kate Flannery

What Schools Are Affiliated With Kate Flannery?

Kate Flannery is affiliated with the following schools: