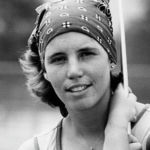 Why Is Kate Schmidt Influential?

According to Wikipedia, Kathryn Joan "Kate" Schmidt is an American former world record holder in the javelin throw. A native of California, graduate of Woodrow Wilson Classical High School, and alumnus of UCLA, she won bronze medals at the 1972 and 1976 Olympics. She qualified for the 1980 Olympics, but did not compete due to the 1980 Summer Olympics boycott. She placed fourth at the 1984 Olympic Trials.

Other Resources About Kate Schmidt

What Schools Are Affiliated With Kate Schmidt?

Kate Schmidt is affiliated with the following schools: