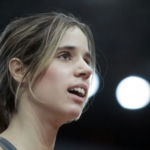 Why Is Katerina Stefanidi Influential?

According to Wikipedia, Katerina Stefanidi is a Greek pole vaulter. She won the gold medal at the 2016 Olympic Games with a jump of 4.85 meters and has also competed at the 2012 and the 2020 Summer Olympics . She is the current European Outdoor and Diamond League champion, a World Outdoor champion, a European Indoor champion, and a two-time World Indoor bronze medalist. Stefanidi has won a total of eleven medals in all five major international athletics championships. She was named the European Women's Athlete of the Year in 2017, and the Greek Female Athlete of the Year in 2017 and 2019. Because of her achievements she is widely regarded as the greatest female athlete in the history of Greek sport.

Other Resources About Katerina Stefanidi

What Schools Are Affiliated With Katerina Stefanidi?

Katerina Stefanidi is affiliated with the following schools: