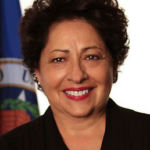 Why Is Katherine Archuleta Influential?

According to Wikipedia, Katherine L. Archuleta is an American teacher and a political executive. She was the director of the United States Office of Personnel Management. President Barack Obama appointed her on May 23, 2013. She was sworn in on November 4, 2013. She had previously served as National Political Director for Obama's 2012 reelection campaign. Prior to that, she had been executive director of the National Hispanic Cultural Center Foundation in New Mexico, had co-founded the Latina Initiative, had worked at a Denver law firm, and had worked in the Clinton Administration as chief of staff to the Secretary of Transportation, Federico Peña. She became embroiled in controversy after the disclosure of a massive national security breach in June 2015. The hack involved the theft of millions of federal employee records and included security-clearance details dating back 15 years, which prompted lawmakers from both political parties to demand that she resign. On July 10, 2015, Archuleta tendered her resignation.

Other Resources About Katherine Archuleta

What Schools Are Affiliated With Katherine Archuleta?

Katherine Archuleta is affiliated with the following schools: