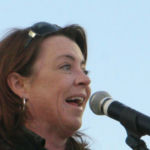 Why Is Kathleen Madigan Influential?

According to Wikipedia, Kathleen Madigan is an American comedian and TV personality. In addition to her stand up comedy performances, she is a regular guest on a variety of U.S. television programs. Early life and education Kathleen Madigan is one of seven children in the large Irish Catholic family of Jack and Vicki Madigan, a lawyer and a nurse respectively. She grew up mostly in the St. Louis suburb of Florissant, although the family also lived for periods of time in House Springs, Missouri and in the Lake of the Ozarks region of central Missouri. Madigan received the first eight years of her education largely in private Catholic schools, although she also attended the public School of the Osage. It was there she excelled as a student athlete, participating in volleyball, track, and basketball. In the latter, she set a record by winning the 1978 Mid-Missouri Hoops Shoot Championship. At the time she was 4' 5" tall and set a record as the shortest person to win the event. She shot under-handed, sinking 14 of 15 attempts.

Other Resources About Kathleen Madigan

What Schools Are Affiliated With Kathleen Madigan?

Kathleen Madigan is affiliated with the following schools: