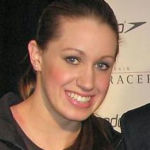 Why Is Katie Hoff Influential?

According to Wikipedia, Kathryn Elise Hoff is a former American competitive swimmer, she is an Olympic medalist, and former world record-holder. Hoff was known for her success in the 200-meter and 400-meter individual medley. She represented the United States at the 2004 Summer Olympics and 2008 Summer Olympics, in which she was awarded a silver medal and two bronze medals.

Other Resources About Katie Hoff

What Schools Are Affiliated With Katie Hoff?

Katie Hoff is affiliated with the following schools: