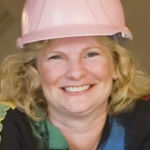 Why Is Kelly L. Moran Influential?

According to Wikipedia, Kelly Lynne Moran is an American actress, artist, author and builder. The Washington Times newspaper wrote "she is also one heck of a designer." She has a degree in Fine Arts from Frostburg State University, graduating in 1982 and continually trains at the Schuler School of Fine Arts in Baltimore, Maryland, painting in the 16th Century Dutch Old Masters' style. She continued her education at the George Washington University in 1995 studying Landscape Design and the USDA Graduate School studying Botany, and Horticulture. Working as a landscape designer in the Washington D.C. metro area landed Moran on Fox 5 News in 2002, at 5:00 doing gardening segments.

Other Resources About Kelly L. Moran

What Schools Are Affiliated With Kelly L. Moran?

Kelly L. Moran is affiliated with the following schools: