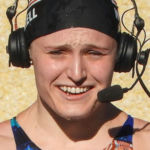 Why Is Kelsi Dahlia Influential?

According to Wikipedia, Kelsi Worrell Dahlia is a former American competitive swimmer specializing in butterfly and freestyle events. At the 2018 World Championships, Dahlia won nine total medals of which seven were gold medals. She qualified for the 2016 Rio Olympics in the 100-meter butterfly and won a gold medal in the 4 x 100-meter medley relay for swimming in the heats.

Other Resources About Kelsi Dahlia

What Schools Are Affiliated With Kelsi Dahlia?

Kelsi Dahlia is affiliated with the following schools: